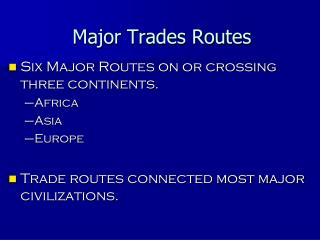 Major Overland Routes To The West - . by: alex michel. the purpose. the purpose of most of these trails were to expand

Major Overland Routes of the West - . by marlana quaill. trails in the 1800s. trails helped travel become easier and more

MAJOR OVERLAND ROUTES TO THE WEST - . joey woomer. when. the overland trails started in 1849. what. the oregon trail was

Major Trade Routes of the 1500’s - . silk road across asia to the mediterranean sea maritime (sea) routes across the

Bot trades - Let the pros trade while you learn! you can actually earn money while learning how to do passive trading?

Capacity Trades - . rules and regulations. exchange rules must comply with a contract on accession to wholesale power

Colonial Trades - . introduction. in colonial times there were no factories and everything had to be hand made. each