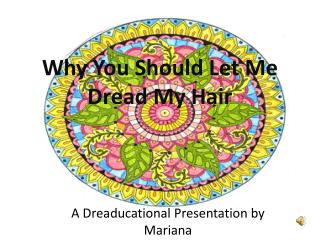 Why You Should Let Me Dread My Hair. A Dreaducational Presentation by Mariana. Common Misconceptions About Dreadlocks. Myth: People with dreads don’t wash their hair. Why Should My Conscience Bother Me? - . engineering group “all that’s left to do is ship you the brake” robert sink

Who's at my door and why should I let you in? - . challenges and strategies to forming relationships with difficult to

Why you should wear Hair Extensions - If you are considering buying hair extensions, but you are not sure if itu2019s

Why Should You get Hair Extensions? - Do you want to take advantage of hair extensions? and looking for a nyc hair

Why Should You Use Laser Hair Removal Technique - If you are planning on undergoing laser hair removal, you should limit

Why Should You Choose Salon for Hair Care? - The hairstylists working in salons are certified, professionals. they know

Why Wonâ€™t They Just Let Me DO MY JOB! - . how to overcome educator burnout. research shows that; students show

Why you Should Consider Scrap My Car Services? - With the increasing in the global warming, we should take a step towards

Why should you opt for my assignment help? - They feel exhausted and need a break. this is the main reason that many

17 Reasons Why You Should Ignore My Buy - In case you are a shopaholic, then it is far from stunning that you will like

Certified Python Classes in Pune ! Let me tell you why? - At python classes in pune, you will understand that it is easy