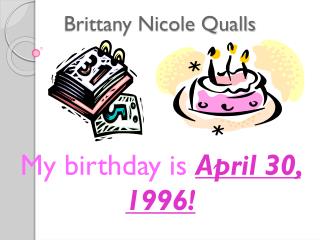 Brittany Nicole Qualls. My birthday is April 30, 1996!. Brittany. Your first name, Brittany , creates an independent, determined, and persevering nature. You desire to work on your own or at least where you are making your own decisions. BRITTANY - . brittany is a region in north-west of france. map of france. it is made of 4 departments . ours is in the

Brittany - . breizh. nationalism in brittany: left and right, cultural, political. territorial integrity. one of the

Brittany Morrow - . concept map. 3 strengths. my strengths in this class were without a doubt the podcast, the assistive

Brittany Palmer - If you give a pig a pancake . brittany

Nicole - . all about me. my super power. if i could have a super power it would be to fly with all the super heros. what

By: Brittany Hogh - Stress management. audience: college freshmen. by: brittany hogh. is the body's reaction to a change