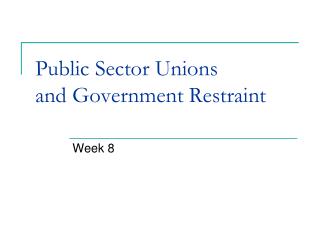 Public Sector Unions and Government Restraint. Week 8. United Nations: Universal Declaration of Human Rights. Article 23 (4): Everyone has the right to form and to join trade unions for the protection of his [or her] interests. http://www.un.org/en/documents/udhr/.

Government and Public Affairs - . ( g.p.a. ). introduction. all s.3 students are welcomed to find out what gpa at hkce