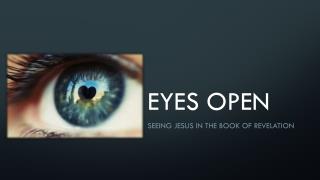 Open Your Eyes - . ii kings 6:15-17. open your eyes. do you have vision problems? millions of people in this country have

Open My Eyes - . open my eyes that i may see glimpses of truth you have for me place in my hands the wonderful key that

Open My Eyes - . you are the holy god, nothing compares to who you are king of the heavens and the earth savior of

Open The Eyes Of My Heart

Open the Eyes of my heart - Holy, just like you revive my heart renew my soul in your oh lord i am made whole no more in