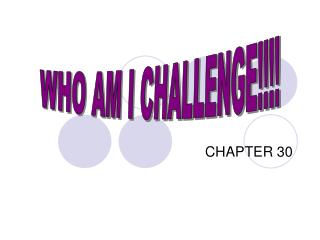 WHO AM I CHALLENGE!!!!. CHAPTER 30. WHO AM I?. I helped start the revolution in Russia without ever being there. The leaders of the Bolsheviks took my ideologies & turned Russia into a Communist state. You could say…I left my “Mark.”. KARL MARX. WHO AM I?.