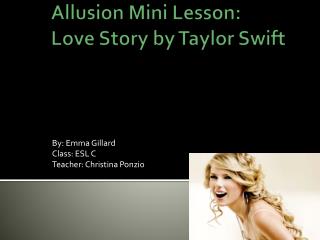 By: Emma Gillard Class: ESL C Teacher : Christina Ponzio. Allusion Mini Lesson : Love Story by Taylor Swift. What is Allusion. An Allusion is when an author refers to another book, play , or movie in his / her piece of work . Love is a Fallacy - Unit 5. love is a fallacy. max shulman. lecturer: meng fanyan. teaching objectives. to have a basic

LESSON -10 A STRANGE WRESTLING MATCH - . once there lived a tall strong wrestler named vijay singh. he often landed in

Lesson Five - . love is a fallacy ---- by max shulman. objectives of teaching. to comprehend the whole text to lean and

1. Allusion - . a reference to something outside the text, such as another work of literature. in section 1 of beowulf ,

Swift Water - . swiftwater. one of the most dynamic and dangerous areas of special operations difficult to train for

SWIFT FOR TRADE - September 2007, bangladesh. swift for trade. contents. what is swift what is bke swift message /

allusion - . definition: a reference to something with which the reader is likely familiar, such as a person, place or

“The Masque of the Red Death” Objective: Analyze how symbolism is used in the story - . what is an allegory :. a type

POETIC TERMS - . allusion. a reference to a historical figure, place, or event . allusion. the teams competed in a david