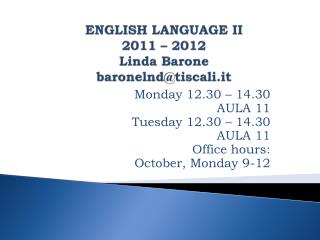 HELP! My Student Doesn’t Speak English - . an orientation into the world of english as a second language november 3,

Language: an overview - . meichun liu chinese ii and iii. some basic questions:. what is involved in language? what is

Middle English: What kind of a language is it? - . a brief review: how we got there? i.e. how middle english came into

IA901 2012 Session Four - . lab session: corpora what is a corpus? what do corpora tell us about the english language

All Singapore laws are written in English - . but the english language is the most ambiguous language resulting in

International Phonetic Alphabet(IPA) for the English Language - . pre-test . #1)a basic definition for ipa is. a)