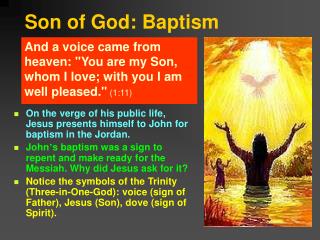 And a voice came from heaven: "You are my Son, whom I love; with you I am well pleased." (1:11). On the verge of his public life, Jesus presents himself to John for baptism in the Jordan. John ’ s baptism was a sign to repent and make ready for the Messiah. Why did Jesus ask for it? New Testament Chronology - . a visual guide to understanding the order of events in the lives of the major characters in

Baptism What the Bible says? v.2 - . who should take baptism?. jesus himself took

The - 7. the. baptisms. of the new testament. perhaps no subject is more maligned in the religious world than the subject

The New Testament's Teaching Concerning Baptism - . perhaps no subject is more maligned in the religious world than the

LESSON 11: BAPTISM - . purpose. to help each child better understand the importance of baptism. . our opening prayer will

Welcoming a Baby! - . how do people welcome a baby in a christian family? what is baptism? baptism is a sign of welcoming

BAPTISM - . st. edward catholic church rcia program. why you are

THE DOCTRINE OF BAPTISM - Welcome!. the doctrine of baptism. by rolan monje, dpth, mmin and oat suwanakoot, mdiv 2007

The E word - . 1910 the world missionary conference. “ the most notable gathering in the interest of the world wide

Shakespeare and His Times - . his birth. born in 1564. we know this from the earliest record: his baptism which happened

Shakespeare and His Times - . his birth. born in 1564. we know this from the earliest record: his baptism which happened

The 7 Sacraments - . what is a sacrament?. a sacrament is a physical sign of a spiritual reality there are 7 sacraments

Why did Jesus begin His ministry with baptism?

Religious Minorities - . the european world. ‘almighty god, you are the way and the truth; because i have not been