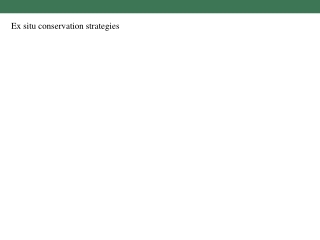 Ex situ conservation strategies. 14.1 Takhi or Przewalski’s horse is extinct in the wild. extinct in the wild – individuals of a species remain alive only in captivity Ex Takhi is no longer found in their native Mongolia but is doing well after reintroduction into a national park. Introducing the Conservation GeoPortal - . www.conservationmaps.org. discover and publish conservation maps and data a

In situ conservation of Danish plant genetic ressources of wild relatives to agricultural crops - . a survey of 100 crop

Oregon Department of Fish and Wildlife - . setting the scene: the oregon conservation strategy. introducing the oregon

How to do AFP-NMR - . in situ or not situ that is the question. outline. review afp-nmr method measuring p on fnpb