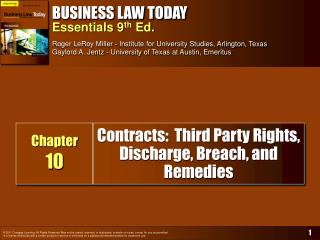 Chapter 15 Contracts: Third Party Rights - . introduction. only the parties to a contract have rights and liabilities

Chapter 15: Third-Party Rights and Discharge - . privity of contract. the state of two specified parties being in a

Rights and Remedies - . associate professor cameron stewart. appointment, retirement and removal of trustees . only a

Performing Contracts and Breach - . what happens if a party does not perform to the satisfaction of another party to whom

Chapter 16 Contracts: Third Party Rights - . learning objectives. what is the difference between an assignment and a

CHAPTER 9 Third Party Rights, Discharge, Breach, and Remedies - . learning objectives. what is the difference between an

Chapter 15 Contracts: Breach and Remedies - . learning objectives. what is the difference between compensatory and