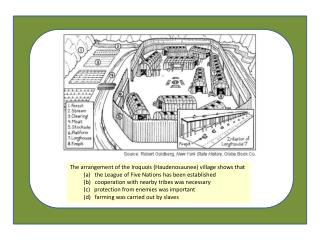 The arrangement of the Iroquois ( Haudenosaunee ) village shows that (a) the League of Five Nations has been established (b) cooperation with nearby tribes was necessary (c) protection from enemies was important (d) farming was carried out by slaves.

League of Nations - . history 12 ms leslie. the 14th point. wilson’s 14th point was to create a league of nations lloyd

Question 1 - . what role did the league of nations play in the successful takeover of ethiopia? a. none, it allowed italy

“The League of Nations was doomed from the start.” Do you agree? - Negative. positive. failure of usa to join from

THE LEAGUE OF NATIONS - . whose idea?. the league of nations was the idea of woodrow wilson, the us president in 1919.

THE LEAGUE OF NATIONS - Catalysts for creation. the league of nations. wwi and the alliance system wilson’s idealism.

Iroquois Peoples - . by: alexa , donna, mikaila , isabella, and emily. location. the original homeland of the iroquois

Chapter 2 Review - . what is an iroquois custom that is still practiced today?. using woodland animals as a primary food

The United Nations - . why do we have the un?. after world war i, the league of nations was created to prevent another

From Appeasement to War - . 14.1 notes. standard and objective. i. aggression goes unchecked. japan took over manchuria

THE LEAGUE OF NATIONS - . went into effect in january 1920, with 42 members. eventually 63 governments joined the league,

Respectfully Teaching the Visual Arts of the Haudenosaunee - . native americans of the seneca, cayuga, onondaga, oneida,