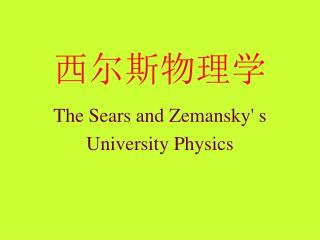 西尔斯物理学. The Sears and Zemansky' s University Physics. Units, Physical Quantities and Vectors. 1-1 Introduction For two reasons: 1. Physics is one of the most fundamental of the sciences. 2. Physics is also the foundation of all engineering and technology.

How to Spread the Knowledge of Physics Beyond the Walls of the Classroom - . … and still get tenure. scientists in the