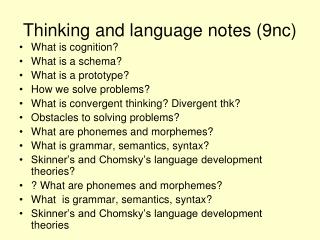 Thinking Maps - . what are thinking maps?. thinking maps are eight visual-verbal learning tools, each based on a

Basic Critical Thinking Skills - . essentials of clear thinking: claims and issues. notes on claims. a claim is a

Teaching strategies for EAL Advanced Learners: Tools &amp; Frameworks that can help when thinking through the

Start thinking of math as a language , not a pile of numbers - . just like any other language, math can help us

Thinking and Language - . thinking and language. what is the sum of 362 and 499? you found campbell’s soup on aisle 10

Thinking and Language - . language. language: the expression of ideas through symbols (spoken/written/etc.) that are

Notes for “What is Language” Chapter One of Fromkin Rodman &amp; Hymas - . main points. knowledge of a language