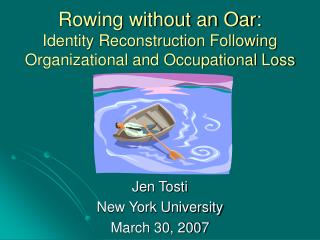 Rowing without an Oar: Identity Reconstruction Following Organizational and Occupational Loss. Jen Tosti New York University March 30, 2007. Status of Research and My Goals for Today. I welcome any and all suggestions for: Additional literatures to which this research contributes Reconstruction - . essential questions. how did “executive reconstruction” differ from “legislative

The End of Reconstruction - . 12.3. objectives. explain why reconstruction ended. evaluate the successes and failures of

Reconstruction - . reconstruction. the effort to rebuild the southern states and restore the union after the civil war

Loss of Identity - . (all quotes are from night by elie wiesel). “the week of passover. the weather was wonderful. my

What is an efficient rowing technique- “moving a boat” - . by kris korzeniowski saratoga springs, january 2013.