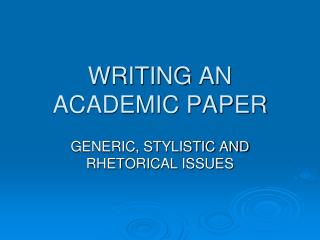 WRITING AN ACADEMIC PAPER. GENERIC, STYLISTIC AND RHETORICAL ISSUES. AN ACADEMIC PAPER IS. A CODIFIED GENRE WITH A WELL- DEFINED STRUCURE WRITTEN IN A FORMAL STYLE USED TO PRESENT A SIGNIFICATIVE PIECE OF RESEARCH OR TO TAKE STOCK OF A PARTICULAR RESEARCH FIELD. STRUCTURE (1). TITLE PAGE Step up to Writing - . specially designed instruction tool. content language objective. participants will be able to

How to write a great research paper - . simon peyton jones microsoft research, cambridge with amendments/additions by

Learning to Love the Research Paper Or … at least learning to do it well! - . mla and apa made easy the academic

Writing a Research Paper - . or yes you must write one, and no, you can’t steal it from the internet. what is a