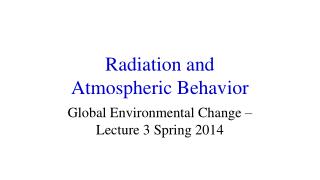 Radiation and Atmospheric Behavior. Global Environmental Change – Lecture 3 Spring 2014. What is Radiation?. Radiation describes a process in which energetic particles or waves travel through a medium or space Radiation is often referred to as electromagnetic radiation (EMR)