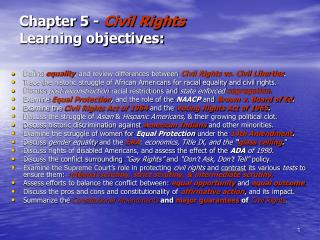 Amendments to the U.S. Constitution - . a team foster study guide. amending the constitution. to change, or amend, the

Civil Rights What are civil rights?  - The protections and privileges given to all u.s. citizens by the constitution

CIVIL RIGHTS - . what are civil rights?. civil rights refers to the positive acts governments take to protect against

Civil Liberties - . chapter 15. protection under bill of rights. students do not shed constitutional rights at the door,

The Cold War and Civil Rights - . the united states from the 1950s to the 1970s. topics for today. the red scare civil

CIVIL RIGHTS - . chapter 6 o’connor and sabato american government: continuity and change. in this chapter we will