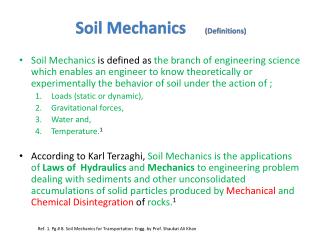 Soil Mechanics (Definitions). Soil Mechanics is defined as the branch of engineering science which enables an engineer to know theoretically or experimentally the behavior of soil under the action of ; Loads (static or dynamic), Gravitational forces, Water and, Temperature. 1

CHAPTER 8 (ch. 3 in ref.1) - . engineering materials and their properties. materials – are the food of design. this