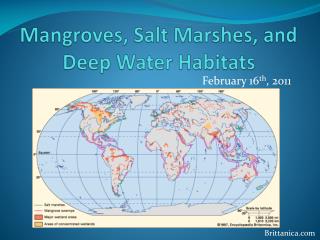 Salt Marshes - . aquatic or terrestrial?. salt marshes are aquatic. characteristics. they are coastal wetlands that are

Salt Marshes - . to the untrained eye, a salt marsh looks like a soggy, smelly place with too many bugs. years ago, they

Salt marshes are pretty - . salt marshes occur where the land meets the sea, usually behind an estuary or sound and only

Salt Marshes -biotic perspectives - . what is a salt marsh?. “a community of emerged halophytic vegetation in areas

DEEP OCEAN HABITATS - . mesopelagic bathypelagic abyssopelagic. environmental characteristics. at all times at any given