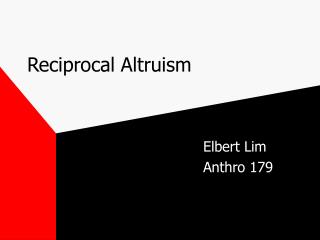 Reciprocal Altruism. Elbert Lim Anthro 179. Reciprocal Altruism. Term was coined by Robert Trivers (1970’s). Refers to the offering and receiving of support, but at a cost to reproductive fitness. Relatively recent field of study: no real work done on this subject until late 1960’s. Reciprocal Altruism: - . mona moshtaghi. be kind or be left behind. helping in times of danger sharing food helping the

Altruism - . chapter 9 reading on reserve. questions to be addressed. what is altruism? what motivates people to help

Altruism: - Increasing another individual ’ s fitness (b) at a cost (c) to one ’ s own (direct) fitness. can only

Altruism - . an attempt to overcome some problems with hobbes. task. complete the task on the sheet. this activity forces

ALTRUISM - . helping for no reward, even at some cost to oneself. biological ( evolutionary ) explanations of altruism :.

Altruism - . a motive to increase another ’ s welfare without conscious regard for one ’ s self-interests. lo1.

Altruism - . a motive to increase another ’ s welfare without conscious regard for one ’ s self-interests. lo1.

Context: altruism - . planning your (3) pieces of context writing. so wadda we got?. we “got” a novel – tequila we

Animal Altruism - . altruism occurs when the giver suffers a fitness loss while the recipient experiences a fitness gain

Altruism among Kin vs. NonKin : Effects of Cost of Help and Reciprocal Exchange - . by noelle bringmann , autumn nailes ,

Reciprocal Reading - . you will learn:. what the 4 roles in reciprocal reading are. about the 4 strategies covered in

RECIPROCAL TEACHING - . helps you create your own meaning of content helps with metacognition empowers you to become