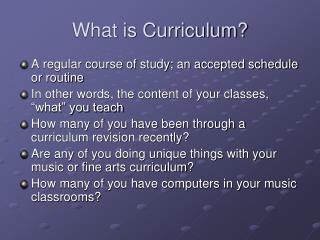 What is Curriculum?. A regular course of study; an accepted schedule or routine In other words, the content of your classes, “what” you teach How many of you have been through a curriculum revision recently? Are any of you doing unique things with your music or fine arts curriculum? Using Curriculum-Based Measurement for Progress Monitoring in Math - Step 3: how to administer and score math

Chapter 8- Curriculum Design - . design. the arrangement of the elements of a curriculum into a substantive entity.

The Process of Curriculum Development - . 2009. curriculum development process. define the elements of curriculum;

The Curriculum Models and Definitions - . goal: explore a variety of program and curriculum definitions as well as ways