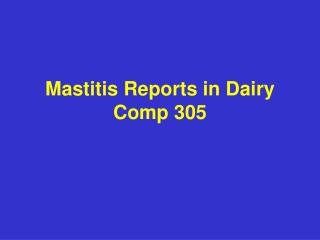 Mastitis Reports in Dairy Comp 305. There are a number of reports and graphs related to Mastitis and Milk Quality in Dairy Comp under the Mast heading. Understanding the Reports.

Dairy Cattle Evaluation - . why judge dairy cattle?. gain a better understanding of what makes a productive and

Bovine Mastitis - . what’s mastitis ?. inflammation of one or more quarters of the udder. normal. inflamed. mammae =

Health and Care of the Hoof - . lameness. third most important cause of economic loss to the dairy industry first is

The Dairy Industry - . dairy industry. provides milk and other dairy foods to consumers in north america and many foreign

SEMIOLOGY AND DIFFERENT CAUSES OF GRANULOMATOUS MASTITIS - . a. saidane, n. dali, i. marzouk, a. fennira, a. manamani, l.

Dairy Foods and the Dairy Industry Jeopardy - . jeopardy. with your host, mr. hol stein. what is our first topic?.

Dairy Cattle Evaluation - . why judge dairy cattle?. gain a better understanding of what makes a productive and