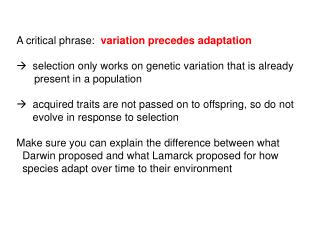 A critical phrase: variation precedes adaptation  selection only works on genetic variation that is already present in a population  acquired traits are not passed on to offspring, so do not evolve in response to selection Make sure you can explain the difference between what

Adaptation and Variation - . adaptation. are characteristics of an organism that makes it suited to its environment.

Adaptation and Variation - . sbi3u section 7.1 pg 296-304. adaptation. adaptation is a structure, behaviour or

Variation and adaptation - . starter. the current population of planet earth is more than 7 billion people!. no two

7.1 adaptation and variation - . sbi3u ms. de sousa. only the fittest survive…. what does the saying : «  only the

Adaptation,Variation and Natural Selection - . march 27th. adaptations and survival. an adaptation is a structure ,

Species, Variation, Adaptation, Natural Selection and Evolution - . including an overview of florida’s i mperiled

How Society Precedes the Individual

Got a Verb Phrase? - . -karen peterson. what is a verb phrase?. a verb phrase consists of two things: 1. the main