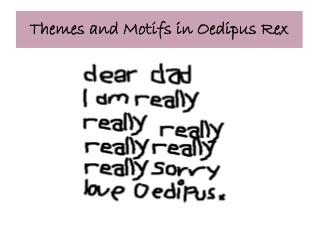 Themes and Motifs in Oedipus Rex Themes and Motifs in Oedipus Rex. Theme of Free Will versus Fate. Central theme – tension between individual choice and fate. Choices are signifigant – like O’s decision to pursue knowledge of identity HOWEVER: fate responsible for O’s incest and many critical events of play.

Themes and Motifs in Oedipus Rex

Higher Education in the New Century: Themes, Challenges, and Opportunities - . a social transformation. the 20th century

Key Themes of Labeling Theory - . the role of identity/self-concept in criminal behavior distinction between

This fibula excavated from the Regolini-Galassi Tomb illustrates motifs borrowed from the Orient. Which of the followin