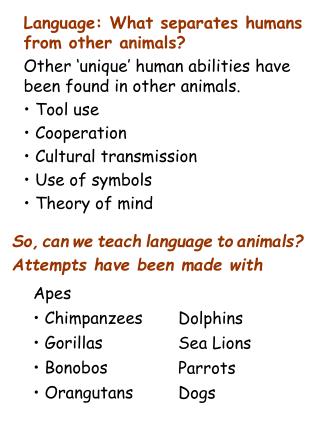 Language: What separates humans from other animals? Other ‘unique’ human abilities have been found in other animals. Tool use Cooperation Cultural transmission Use of symbols Theory of mind. So, can we teach language to animals? Attempts have been made with Apes Chimpanzees Nocturnal Animals - . science sol 1.6 and 1.7 night and day animals and habitats. what is a nocturnal animal? (1).

Reading Street - . unit 1 week 5. how are people and animals important to one another?. animal friends. how do people

Chapter 33 The ANIMALS - . this is the big chapter…. overview: life without a backbone. invertebrates are animals that

The Cladogram of Animals - . the features of animal body plans provide information for building the cladogram, or

How are you special? Humans and Animals Common - SEED, Differences - ABCD - Session 1 – search for happiness. how are

Pharmaceutics - . 1. introduction to drugs and pharmacy. heritage of pharmacy drug standards （药品标准） the

ANIMAL AND PLANT ADAPTATIONS - . bio 11. types of adaptations. morphological – structural adaptations – such as

Chapter 34 - . vertebrates. overview: half a billion years of backbones by the end of the cambrian period, some 540