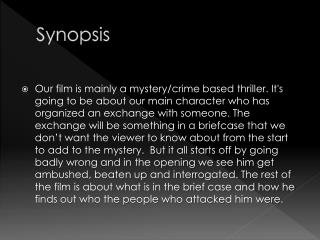 Synopsis - . adaptation to environments? why is sex good? evolutionary theory of the maintenance of sex case studies.

Synopsis - . in a few decades

Synopsis - . the path of the exam. what is a synopsis?. a short exercise - 2 pages per person it is not an essay! it is

Synopsis - . it has been estimated that at least 40% of the total human genome sequence contains the integrated fragments