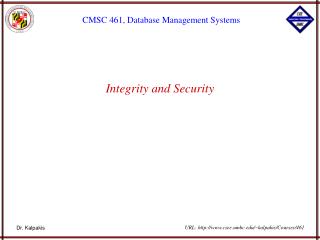 Data Integrity and Security - . data integrity. data that has a complete or whole structure a condition in which data has

Security &amp; Integrity - Information maintained in a dbms is often used both in day-to-day operation of an

Database Administration: Security and Integrity - . university of california, berkeley school of information is 257:

Chapter 4: Integrity and security - . chapter objectives. after completing this chapter, you will be able to: describe