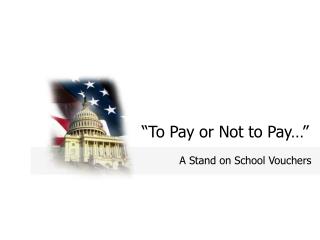 “To Pay or Not to Pay…”. A Stand on School Vouchers. Imagine If…. You are part of the… Upper Class Children been attending Private Schools since they were in Kindergarten Middle Class Children are in Public, bused to an inner city magnet school. would like to go private Lower Class