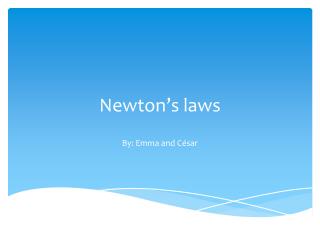 Newton’s laws . By: Emma and César. Newton’s First Law Of Motion . Definition: Every object in a state of uniform motion tends to remain in that state of motion unless an external force is applied to it. Activity 1 : Body At Rest. Newton’s Laws - . inertia. inertia. newton’s 1 st law an object wants to keep on doing what it is already doing in