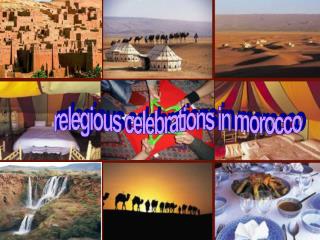 UNESCO in Morocco - . the draa valley – a w orld heritage site. what is unesco doing in

FILM IN MOROCCO - . the place and the people. “what we know of foreign cultures is almost entirely communicated through

Tours In Morocco - Magic lamp tours customized morocco tours packages based on the needs you express to us. we offer

Trekking in Morocco - The atlas mountains offer plenty of opportunities to take trekking tours in morocco. which cater to

Celebrations - . celebrations. verb = celebrate ( 거행하다 , 축하하다 ). what do you celebrate in korea? -

Celebrations ! - . here are some common festivals, holidays and celebrations from around the world. 1. chinese new

Morocco - . by mathew and cillian. facts. morocco is in north africa the capital is rabat the currency is moroccan dirham

Morocco - . audra polsky. geography in morocco. morocco is located on the continent of africa and borders with algeria,