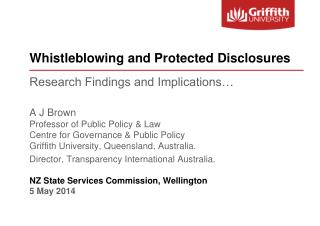 The Protected Disclosures Act: How to advise - . by gabriella razzano. whistleblowing

Whistleblowing - . some definitions. bringing an activity to a sharp conclusion as if by the blast of a whistle (oed);

WHISTLEBLOWING - . the exposure, by people within an organisation, of illegal or unethical activity, or

Whistleblowing - Introduction. definition: ?disclosure of illegal, immoral, or illegitimate practices that are under

Whistleblowing - . and loyality. definition. a voluntary attempt by an employee to bring a wrongful practice to the