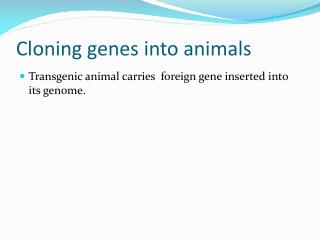 Genetic Engineering and Recombinant DNA Technology - . diversity of life is based on the differences in genes (dna) 1

Cloning - . what is cloning?. cloning describes a number of different processes that can be used to produce genetically

Cloning - . gene cloning – replication of donor genes in bacterial or other host cells clone – a group of cells,

GENETIC ENGINEERING - . what is it? what are the advantages (pros) and disadvantages (cons)? what is your opinion?.

GENETIC ENGINEERING - . what is it? what are the advantages (pros) and disadvantages (cons)? what is your opinion?.

What is cloning? - . “assisted reproductive technology” ability to create genetically identical organisms by

Cloning and genetic engineering by Ivo Frébort - . cloning. clone: a collection of molecules or cells, all identical to

The Cladogram of Animals - . the features of animal body plans provide information for building the cladogram, or