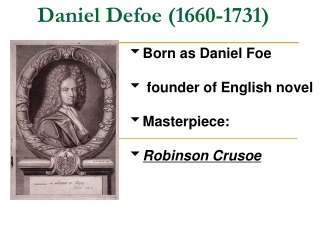 Daniel Defoe - . by martin anderson and logan hinderliter. early life. born to james and alice foe of london in 1660

Daniel Defoe - . background of the author. daniel defoe has been called the father of journalism. to many of his

DANIEL DEFOE - . daniel defoe was born in 1661 in london. his famous books are:. items of daniel defoe. it is never late