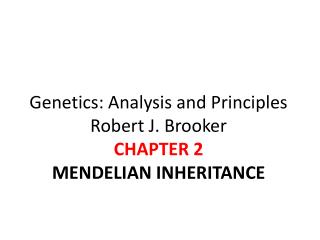 Genetics: Analysis and Principles Robert J. Brooker CHAPTER 2 MENDELIAN INHERITANCE. MENDEL’S LAWS OF INHERITANCE. Gregor Johann Mendel (1822-1884) is considered the father of genetics His success can be attributed, in part, to His boyhood experience in grafting trees Genetics - . what dna is telling us!. unit goals. the student will investigate and understand common mechanisms of

Introduction to Genetics - . chapter 11 (m). genetics and inheritance. genetics  the study of heredity that deals with

Splash - . chapter introduction genes and chromosomes 13.1 heredity and environment 13.2 mendel and the idea of alleles

Inheritance - . another fundamental object-oriented technique is called inheritance, which enhances software design and