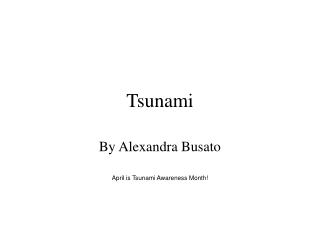 Tsunami. By Alexandra Busato April is Tsunami Awareness Month!. Origin of the word. Tsunami - . what is a tsunami?. a tsunami is a series of ocean waves that are usually caused by earthquakes. the word

Tsunami - . why did the earthquake cause a tsunami ?. shallow focus earthquake large volume of oceanic crust displaced

Tsunami - And earthquakes in maldives by zahid department of meteorology zahid@meteorology.gov.mv www.met.gov.mv phone:

Tsunami - . a wonderful country. with great people. how amazing it was. something that could be changed forever. tsunami

tsunami - The nearby town of leupung has been obliterated by the tsunami. ... also, the arrival of a tsunami is marked by

Tsunami - The world was stunned on december 26, 2004 when the powerful sumatra- andaman earthquake triggered tsunamis