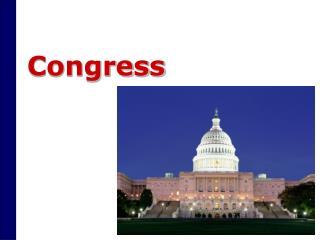 Congress. The Constitution and the Legislative Branch of the Government. Article I describes structure of Congress Bicameral legislature Divided into two houses Each state sends two Senators regardless of population. Chevron – Adding Step 0 - . when a court reviews an agency’s construction of a statute which it administers has

1.In the 1930s, Congress attempted to avoid the situations that led to United States involvement - In world war i by (1)

SIGNIS World Congress 2014 - . media for a culture of peace: creating images with the new generation. christians in the

Congress in Action - . “it is very easy to defeat a bill in congress. it is much more difficult to pass one.” john f.

Answer this question - . should congress reflect the will of the people? or should they pay attention to their own points