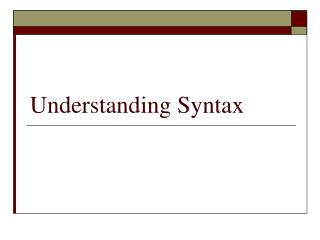 Understanding Syntax. Syntax Defined. Syntax is from a Greek word meaning order or arrangement . Syntax deals with the relation of words to each other as component parts of a sentence, and with their proper arrangement to express clearly the intended meaning. Sentence Defined. Understanding Syntax Sabolcik, AP Lit - . quickchat: what is syntax? why does it matter?. syntax defined. syntax is