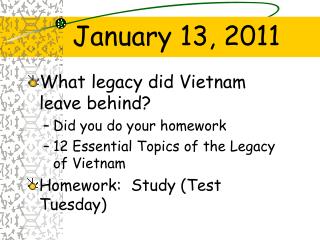 January 13, 2011. What legacy did Vietnam leave behind? Did you do your homework 12 Essential Topics of the Legacy of Vietnam Homework: Study (Test Tuesday). Henry Kissinger. National Secretary Advisor who conferred with Nixon and came up with Vietmanization January 13, 2011 - . the call will begin at 10am central. disclaimer. although this presentation is based on information

Thursday, January 13 th , 2011 - . history of the southwest in: write down everything you know about the

Cougars On Parade January 13, 2011 - . a clinton cougar with pride!. prrrs. four things to remember use playground

January 2011 - . insightexpress’ mobile consumer research. fortifying the industry with knowledge. in our commitment to

January 2011 - . as a precaution, re-check the exam time in early january. various rooms are used, your room will be on