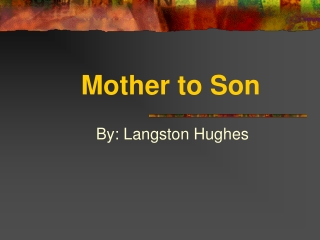 Mother to Son. By: Langston Hughes. Langston Hughes. Most popular writer of the Harlem Renaissance. Wanted to capture the traditions of Black culture in written form. He was born in 1902 and died in 1967. Mother and Son - . a story of oppression, individuality, conformity and the terrible relationship between a mother and

Langston Hughes ’ “ Mother to Son ” - In your notebook, write a paragraph responding to this poem. if you ’ re

Mother and Son - . i will start by reading a poem that i wrote for my son joseph but i will read the last verse in the

Mother to Son by Langston Hughes - . welcome to our presentation on the poem and the harlem renaissance by rebekah frye,

Mother to Son by: Langston Hughes - . biography of langston hughes. he was born in joplin, missouri, james langston

MOTHER TO SON By Langston Hughes - . presentation done by ian benz. bio. born on february 1, 1902 in joplin, missouri he

HOUSE LOST DUE TO HASTY “KUASA” WHEN SON KICKS OUT MOTHER

Mother to Tigers - . by george ella lyons. strolled. if you strolled, you walked in a slow, relaxed way. we strolled

Ballad to my mother - . my mom is always there for me she takes care of the kids she helps me when i hurt my knee and

Devaki Nandana You are the loving Son of mother Devaki - Radhika jeevana hey krishna, you are the very life of radha; you

Mother…. - Is for the million things she gave me. m. o. means only that’s she’s growing old. t. is for the tears

Introduction to Mother Board - . motherboard is the heart, soul, and brain of a computer, this pcb resembles a miniature