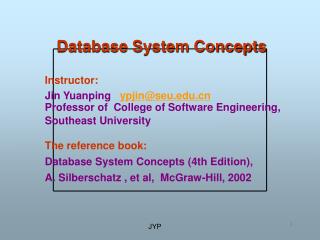 Database System Concepts and Architecture - . dr. ali obaidi. data models. a collection of concepts that can be used to

3.1.5: Relational Database Concepts - . a summary. the aim of this presentation is. to provide you with an overview of

Database - . cvsl for ib itgs. topics to be covered . “ what is a database;” understand the difference between data

Database System Concepts and Architecture - . data models. a set of concepts to describe the structure of a database. the

LECTURE 2 DATABASE SYSTEM CONCEPTS AND ARCHITECTURE - . what is a data model?. a collection of concepts that can be used

IST 220 - Intro to DB - . lecture 1 what is database?. what is a database?. to answer this question, we will discuss the