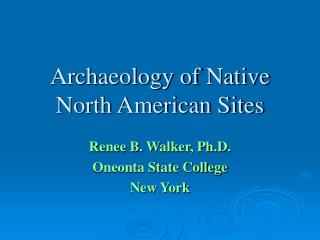 Archaeology of Native North American Sites. Renee B. Walker, Ph.D. Oneonta State College New York. What is Archaeology anyway?. Fossils-Studied by Paleoanthropologists. Preserved remains of creatures from the past. Fossil localities are where fossils are found. Archaeology of North America - . the archaic southwest and lower pecos. the southwest introduction. includes most of new

Fort Ross: Collaborative Archaeology and the native American voice - . section 110. establishment of a contact zone:. in

The Nature of American Archaeology - . culture history. history of american archaeology. important elements in the

Native American - . origin myths. what is a myth?. it is a traditional story that usually has a hero or heroine (main