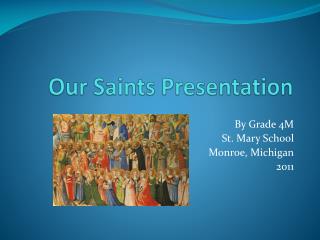 Our Saints Presentation . By Grade 4M St. Mary School Monroe, Michigan 2011. St. Cecelia, pray that our singing at liturgy may be a true prayer!. St. Cecelia . St. Cecelia is the saint of music. A legend says St. Cecelia was stabbed in the neck with a sword three times.

Morpeth All Saints First School WELCOME TO OUR NURSERY - . morpeth all saints c of e first school. what happens during

SAINTS The Holy People of the Church - . a “saint” is someone who is recognized by the church as one who had an

Saints of the Archdiocese of Dublin - . why did kevin go off to the wicklow mountains when he was a young man? why did

The Church: Saints and Angels - . greeting the saints. “to all god’s beloved in rome, who are called to be saints :

Saints presentation - . by: beatrice. my saint . m y saint is st. lucy of syracuse . st. lucy. her feast day is on

SAINTS AND THE WORKS OF MERCY - . living the faith in the way they lived their lives. corporal works of mercy. visit the

The Communion of Saints - . i the church triumphant blessed in heaven can pray for the souls in purgatory, as well as on

Mary and the Saints - . rcia inquiry. what are the catholic church's views regarding mary? it is important to note a

We believe in the Communion of Saints - . prior questions. why do we pray to saints? shouldn’t we pray to god alone?

Tell me about Saints - . we are all called to sainthood through the waters of our baptism. jesus is our model we are all

Saints Cosman and Damian - . what does our holy bible say?…. is anyone among you sick? let him call for the elders of

Popular Saints - . the most important popular saints of our land are :. s. antónio s. pedro s.joão. how do we celebrate