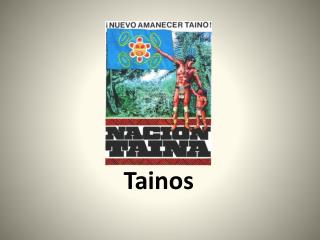 Tainos . Before the Tainos : The Archaics. “ Archaics ” were the first people in the Caribbean. They were hunter and gatherers who used stone tools. They came from both Central and South America into the Caribbean and met around Puerto Rico or Hispaniola by 2000 BC. The Conquest of the Tainos - . juan ponce de leon. former lieutenant under columbus. was governor of the hispaniolan

PHYSICAL CHARACTERISTICS OF THE TAINOS - . grade: 10 teacher: mr. c. brown. tainos. taíno indians, a re a subgroup of

Cassava ( yuca ) roots, the Taínos ' main crop - . students will fill out this chart for each word:. vocabulary.

Chapter 4 - . spain builds an empire. lesson 1: the voyages of columbus. columbus and the taino. on the island of

Columbus and Columbian Exchange - . chapter two, section 2.5. why explore the new world? . people in europe were fond of

Conquest in the Americas Chapter 15 Section 1 - . mr. divett. columbus. the cycle of conquest started with the arrival of

Exploration &amp; Colonization of The Americas - . i. the spanish caribbean. 1. subjugated by the spanish to mine

Hispaniola - . history of a caribbean island. what happened to the native tainos people?. in 1517 king charles v of spain

Prehistoric Americas - . the first civilizations of the caribbean. before christopher columbus. some ancient village