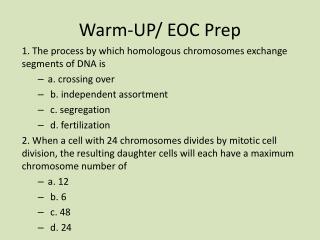 Warm-UP/ EOC Prep. 1. The process by which homologous chromosomes exchange segments of DNA is  a . crossing over  b. independent assortment  c. segregation  d. fertilization

Warm-Up - . why did spaniards felt a rush to start colonizing texas? turn in your explorer foldable!. missions and

Warm up - . use the laws of exponents to simplify the following. answer should be left in exponential form. laws of

#47 Warm UP - . why isn’t there genetic variation in species that reproduce asexually ?. make sure you have the types

Warm-Up / EOC Prep - . 1) the random distribution of homologous chromosomes during the metaphase of meiosis is called

Warm-up - . define the following sentence types and write an example sentence for each: simple compound complex

Warm up pg. 86 - . what are the three different ways tectonic plates can interact with one another? is ocean floor closer

Warm-up #11 - . in your opinion, were the mongols good rulers? why? why do you think the mongols (yuan dynasty) fell?.

Warm-up - . copy hw please grab a packet and green book from the front desk please make these page 24-26 . ignore the

Warm Up - . complete the “k” section of the kwl chart about what you already know about cells. think about what