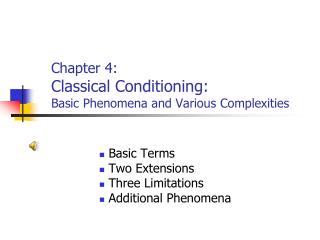 Classical Conditioning - . learning: what does it mean to learn?. learning is the single largest area of psychology

Chapter 9 - . simultaneous equations models. what is in this chapter?. in chapter 4 we mentioned that one of the

Watson’s “Little Albert” Experiment - . one of the most controversial and well known studies that used classical

Chapter 3: Classical Realism By Richard Ned Lebow - Learning objectives. after this lecture you should be able to:

Ch. 9 Learning: Principles and Applications - . http://www.sangrea.net/free-cartoons/phil_joy-of-learning.jpg. how do we

3. Operant Conditioning - . = a form of learning for which the likelihood of a particular response occurring is