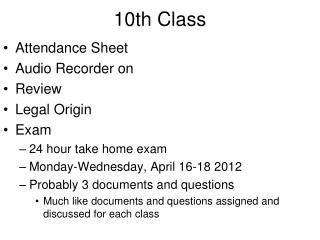 Cbse 10th Class syllabus - The cbse board is acknowledged for its well-structured syllabus. it is a useful guide as it

Agenda for 10th Class - . admin handouts extras to me asap name plates remember to put on the bottom of all writing

10th Class Result 2019 - Bise lahore board is going to announce at the end of july. the matric students should prepare

Agenda for 10th Class - . coase theorem assignment for next class ##59-60 questions to think about / writing assignment

JEE coaching for class 10th - Are you one of those students who like to prepare early for competitive exams? well, good

Arithmetic Progression for class 10th - , learn the formulas to find nth term and sum of arithmetic progression with the