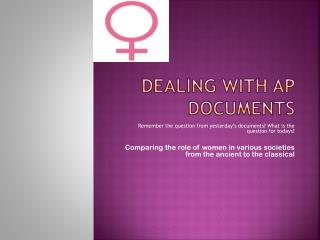 Dealing with AP Documents. Remember the question from yesterday’s documents? What is the question for todays? Comparing the role of women in various societies from the ancient to the classical. Build a framework. Work those documents. Author Place and Time Prior knowledge Audience Reason Dealing with Missing or Stuck Documents in Caplink - . document issues in caplink. one of the more common problems

Dealing with wheelchairs - . some basics :. there are so many different wheelchairs talk with parents and physical

Dealing with Leaks - . what is a resource leak ?. repeated allocation of a resource without timely deallocation probable

Dealing with Doubts - . march 29. think about it … . what do you do while you’re waiting in a line? john the

Dealing with spills - . do you know what to do if you spill a hazardous product?. problems. if spills are not cleaned up

Dealing with Depression - . lesson 11. life crisis. an experience that causes a high level of stress most people respond

Dealing with Conflict - . i. prayer is the first response- not a last resort. ii. respond: anger ought to be your last

Dealing with Stress - . condition of the environment that makes unusual demands on the organism in other words, papers,

Dealing with Disruption - . two types of “problem students”. students with problems what kinds of “problems” do

Dealing with Conflict - . presented by maureen mcconnell chaos networker. conflict is a normal part of life, it is how we

Dealing With Loneliness - Http://freebookoftheday.com/1.php?li=fbotd-selfhelp&p=&b=loneliness lonliness can be

Dealing with Change - . what we are going to talk about…. drivers of change emotions and change change implementation