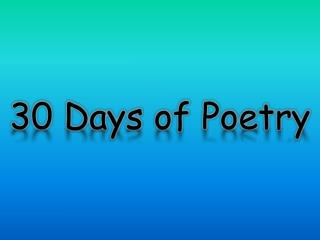 30 Days of Poetry. Day 1: Concrete Poetry. Concrete Poetry is the use of words and their physical formation to convey meaning. This may be done with color, the shape of letters, and/or the arrangement of words. Directions : Graphically create a scene using only words. 30 Days - . by: micah ohlhausen. we all know that pollution is a big deal now and that it affects animals a bunch as

30 Days of Night - . camera. close ups are constantly being used, through these a sense of intrigue is brought upon the

30 Days UAE Visa - If you wish to stay in dubai then 30 days uae tourist visa is best option for you. we deliver you 30

Keto Diet 30 Days - Want to burn down your fats using bodyu2019s natural metabolism? we will help you out. we provide

Days of Remembrance April 23-30, 2017 - Learning from the holocaust: the strength of the human spirit. days of

30 Days to Feeling Fit with - . detox + our diets + exercise = health. the problem is toxins. toxins are everywhere in