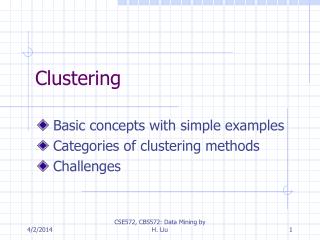 Clustering. Basic concepts with simple examples Categories of clustering methods Challenges. What is clustering?. The process of grouping a set of physical or abstract objects into classes of similar objects. It is also called unsupervised learning . Clustering - . cmput 466/551 nilanjan ray. what is clustering?. attach label to each observation or data points in a set

Clustering - . notes 9 slides created by jeffrey ullman. the problem of clustering. given a set of points, with a notion